Tromso, with just over 75.000 inhabitants, the largest city in Northern Norway owes its population among others to the many students who live in and around the city. The students give the city a special atmosphere, also known as the Paris of the North. You will find a nice shopping street with various shops, there are various covered shopping centers (including just outside the city: Jekta Storsenter with more than 50 shops), there are good restaurants, cozy terraces and a lively nightlife.

In addition to the various museums (such as the Polar Museum and the Tromso Museum), the Ice Sea Cathedral (Ishavskatedralen) is the biggest draw in the city. This fairly modern building has a 35 meter high glass wall. The truly beautiful stained glass window has a surface of no less than 140m2. During the period when the midnight sun is visible, a midnight concert is held every evening (from 11:30 pm to midnight). Very nice !

Fjellheisen is the name for the cable car that brings you almost to the top of Mount Floya. Once at the top you have a great view of Tromso, the fjord and the surrounding mountains: 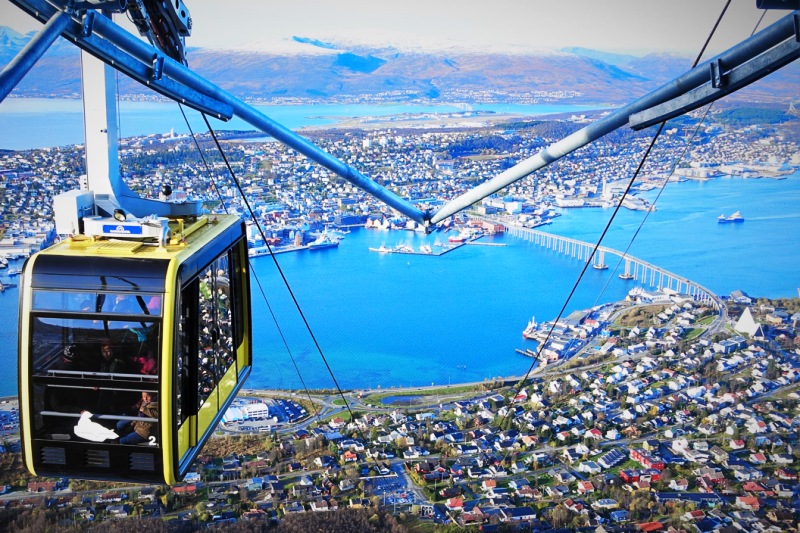 Enjoying the cozy terrace at the restaurant located above, you will see how beautiful nature is here in Northern Norway.

Midnight sun and the Northern Lights

Tromso is approximately 350 kilometers north of the polar circle. Here the sun does not go down from the end of May to mid-July and the midnight sun can be seen clearly.

The many tourists who visit Tromso in the winter, mainly come for the Northern Lights. Because Tromso is located in an area where the Northern Lights can be seen most often. Part of Canada and the interior of Greenland are also in the same zone. Of course it helps that there is an airport just outside Tromso, because in the winter the road ride is not entirely without risk.

Tromso is easily accessible by road via the E6 and then another hour on the E8. There is no train station in Tromso, but there are good bus connections via the NOR-WAY Busekspress. There is an airport and it is just outside the city. Tromso can also be easily reached by water - for example with the Hurtigruten - even in winter.

There are a number of campsites around Tromso which are also open during the winter and, in addition to camping pitches, also offering cabins and (luxury) bungalows: