Haugesund: Homeland of the Viking Kings

When you think of Vikings, you think of Norway. But did you know that Haugesund is the cradle of the Vikings?

The Haugesund area is the area where the Vikings used to live and where the Vikings Kings had their seat. You can experience the unique Viking history in and around the city. Especially Avaldsnes on the island of Karmoy, the stone cross Krosshaugen just north of Haugesund and the lighthouse of Ryvarden where a museum, café and art gallery are located are worth a visit. But the absolute highlight is the 4-day Viking festival which takes place in June at the Viking Farm at Avaldsnes. The purpose of this festival is to revive the history of the Vikings.

Haugesund is a young and vibrant city with around 36.000 inhabitants. Not only a pleasant city with a nice shopping street (the Haraldsgata) and various restaurants at the harbor (tip: lunch at Dattera til Lothe's and dinner at Lothe's), but also a city with nice parks such as Byparken and Radhusplassen (also a market place) and the most beautiful city hall in Norway. Or take a walk along the coast to Haraldshaugen, Norway's national monument.

Langfoss waterfall and hiking on the islands of Rovaer and Utsira

According to the CNN, the Langfoss waterfall (about a 1.5-hour drive from the center of Haugesund) is one of the most beautiful in the world. The water falls in total around 600 meters, very spectacular. You can view the waterfall (after a nice climb) from above: 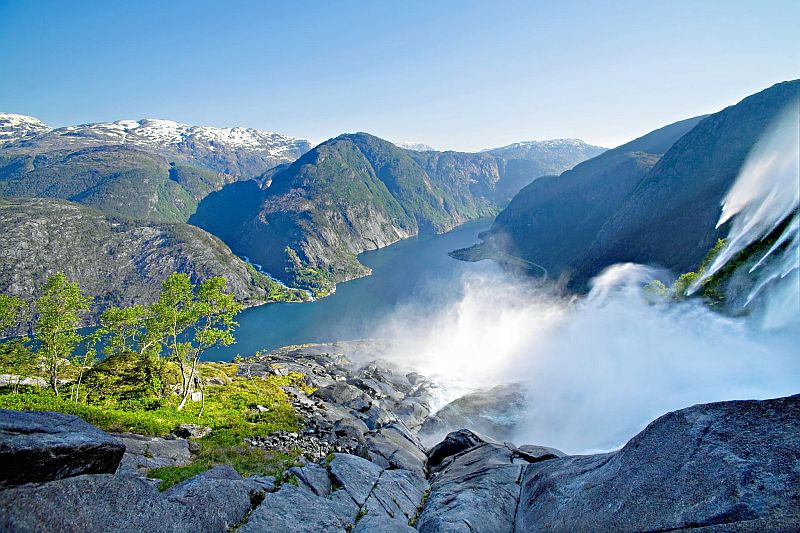 , but the Langfoss can also be seen from the water. Tip: book a fjord cruise on the Akrafjord. From the water you have a beautiful view of the Langfoss waterfall, but also of the impressive surroundings. If you are a hiking enthusiast: the nearest islands of Bakaroy and Risoy can be reached on foot from Haugesund, but especially for hikers the islands of Rovaer (with 110 residents and 1 car) and Utsira (with around 200 residents) are very popular.

Location between Bergen and Stavanger

The city of Haugesund is located on the (south) west coast of Norway, nicely centrally between Stavanger (journey time approx. 2 hours) and Bergen (journey time approx. 3 hours). If you are traveling on the E39 - the coastal road that runs from Kristiansand to Trondheim - then you should definitely make a stop in Haugesund.

Accessibility and campsites around Haugesund

Haugesund can be easily reached by boat, bus and car and also has an airport just outside the city. In and close to Haugesund you will find some nice campsites: