Did you know that Oslo was THE green capital of Europe in 2019?

With almost 700.000 inhabitants, Oslo is the largest city in Norway, beautifully situated on the Oslofjord. This number doubles if you include the residents of the neighboring cities in the Oslo conurbation. Despite its size, Oslo city center is very compact and the many attractions are easily accessible on foot. Tip: visit the Oslo Visitor Center for the many walking and cycling routes through the city. The Oslo Pass, which not only allows you to travel for free by public transport in Oslo, but also gives you has access to more than 30 different museums in the city is also available at the Oslo Visitor Center. Because of the fight against pollution and the commitment to the conservation of nature reserves in and around the city, Oslo was declared THE green capital of Europe.

To visit all the attractions in Oslo you need at least a few days. Therefore, plan in advance what you want to visit. You can also take a walk along the many attractions and plan the following days to visit some of them. A number of popular destinations: the Vigeland Park, the Vikingskipshuset, the Radhuset, the Stortinget, the beautiful Royal Palace Slottet, the modern Opera building and the Akershus fortress in Oslo harbor.

The Vigeland Park (free to visit) houses various bronze and stone sculptures of human figures including "the angry boy". Well worth a visit. You will find the Vigeland Museum at the entrance to the park. In the Vikingskipshuset (Viking Ship Museum) you will find a number of beautiful Viking ships: the Gokstad ship, the Oseberg ship and the Tune ship. Here you experience the history of Norway up close. 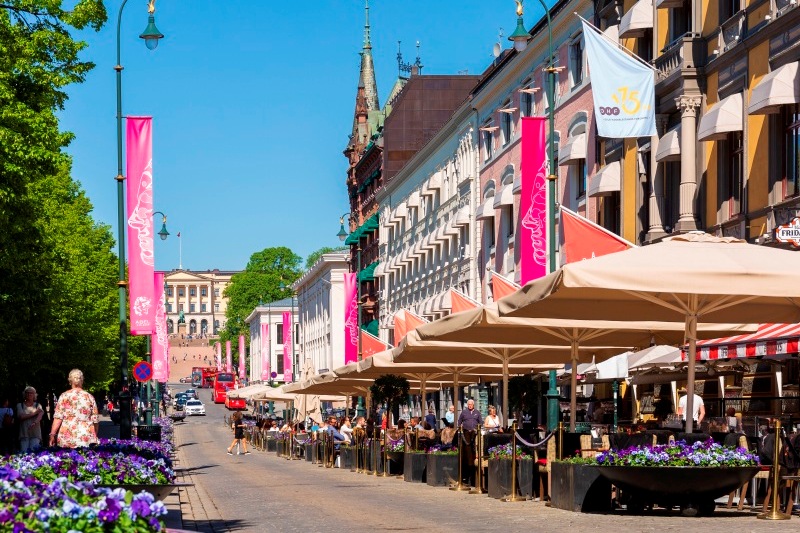 you pass Radhuset (the town hall is - from the outside - not one of the most beautiful buildings in Oslo, but very characteristic of the city and also houses many paintings, murals and artworks) and the Norwegian parliament building Stortinget you will arrive at the impressive Slottet, the Royal Palace in Oslo. The palace is located in a huge park (Slottsparken, no less than 22ha.) where you can take wonderful walks. The Slottet was built for the Swedish-Norwegian King Karl III Johan in the 1st half of the 19th century, but the King of Norway still resides here today: King Harald V. In the summer, many rooms in the Royal Palace are on a guided tour to visit.

Opera House and Akershus Festning in the port of Oslo

The modern Oslo Opera House (“Operahuset”) is in a great location on the banks of the Oslofjord. It was completed in 2008 and houses the National Norwegian Opera and Ballet. During construction, they wanted to create a natural transition between the water and the city. The result looks like "an iceberg coming out of the water". Special about the building is that you can walk ON the marble roof and enjoy the beautiful view. Many concerts, open-air theater performances and other events are organized by the Operahuset. Akershus Festning is the best preserved medieval castle in Norway and is located in the port of Oslo. This 14th century fortress served as a fortress for guarding the city of Oslo.

Accessibility and campsites near Oslo

Because of its location on the Oslofjord, Oslo can easily be reached by boat, but it also has excellent train, bus and metro connections and can also be easily reached by car. The airport of Oslo (Gardermoen) is approx. 50km. north of Oslo. The following campsites are located in the Oslo area: