Jotunheimen, the most popular National Park in Norway

What is the most popular Norwegian National Park? Right ... Jotunheimen!

With 3.500km2. area and countless waterfalls, valleys, lakes, rivers, glaciers and the highest mountains in Norway, Jotunheimen National Park is THE paradise for hikers and nature lovers. You can take multi-day hikes from cabin to cabin, or use the campsites in the Jotunheimen area as a base for occasional beautiful walks. You can also go rafting on the Sjoa River, the best rafting river in Norway. And you can go horse riding, climbing and cycling.

In addition to the Besseggen (1.743 meters) and the Glittertind (2.464 meters), the Galdhopiggen (2.469 meters) is the highest mountain in Norway. Here you can not only ski in the winter, but in the Galdhopiggen Summer Ski Center you can also ski and cross-country ski in the summer. The walk to the top of the Galdhopiggen takes you 4 hours to get there and 2 hours to go back. From the top you have a view of no less than 35.000km2. of beautiful nature and snow-capped mountain peaks. Unforgettable!

The Vettisfossen waterfall in the Utladal near Ovre Ardal, with its fall height of 275 meters, is one of the highest and most beautiful waterfalls in Norway. The total walk (round trip) takes about 4 - 5 hours, including a stop at the Vetti Gard farm. The Vettisfossen is named after this farm and you can not only have coffee with a delicious waffle, but you can also spend the night there.

From the Besseggen Ridge you have a great view of the emerald green lake of Gjende (Gjendevatnet at 984 meters altitude). Via the Gjende ferry (20 minutes) you sail from Gjendesheim to Memurubu and from there it is approximately a 6 - 8 hour walk. Tip: around 60.000 people visit the Besseggen every year. During the week and in the off season it is less busy. If you do go during the high season, then leave on time.

Sognefjellet (route 55) and Valdresflya (route 51), most beautiful routes in Norway

In addition to the Kystriksveien, the Atlanterhavsveien and the Golden Route between Geiranger and Trollstigen, route 55 over the Sognefjellet (from Skjolden to Lom): 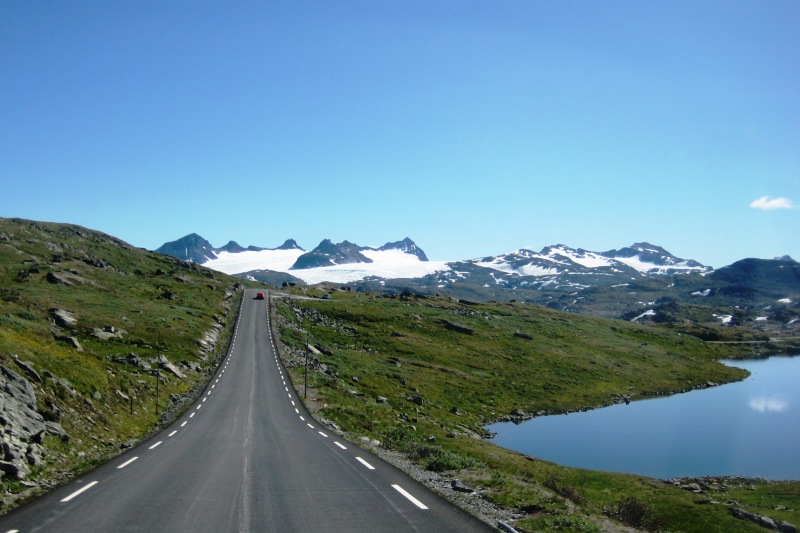 and route 51 through the Valdresflya (from Vaga to Fagernes):

are among the most beautiful routes in Norway.

Campsites near the Jotunheimen

In the immediate vicinity of the Jotunheimen there are a number of nice campsites which, in addition to camping pitches, also offer cabins, bungalows and rooms: