Bergen: beautiful city on the west coast of Norway

Bergen: the most beautiful and largest city on the Norwegian west coast

The beautiful city Bergen lies between 7 mountains on the west coast of Norway. Especially known for the beautiful colored wooden buildings in the harbor: Bryggen. In the vicinity of Bryggen you will also find the fish market and an attraction that you can certainly not skip in good weather is a ride with the Floibanen. Stroll through the city, take a rest in the colorful Byparken park: 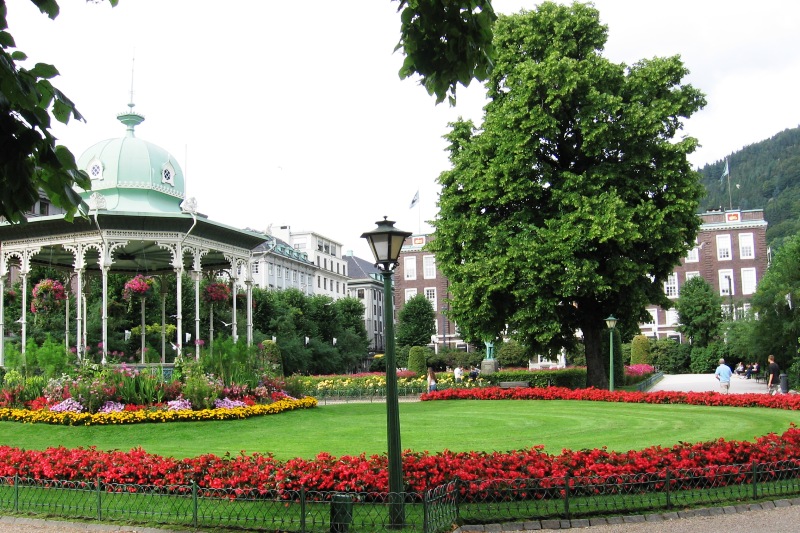 and enjoy the view of the surrounding mountains.

These former trading houses can be found in the port of Bergen and are almost unmissable because each building has a different color. The Bryggen - which means "the quay" - have now been included on the UNESCO World Heritage List. You will now find many tourist shops, restaurants and museums there.

The fish market of Bergen (Fisketorget) is open every day from 7 a.m. to 4 p.m. and in the summer months even until 9 p.m. Nowadays not only fish is sold, but also flowers, fruit, vegetables and souvenirs. On the internet you can still see that it is said "that there are no Norwegian fish sellers left" but that mainly Spaniards, Italians and Asians try to sell the fish. As I have heard it said, the occupation of fish stall depends on the large cruise ships. If around 3.000 Italians are dropped onto the quay from a cruise ship, the occupation is…. Exactly!

The Floibanen is the cogwheel train that takes you to the top of Mount Floyen (300 m.). Only the ride up - with 3 stops along the way - is already well worth the effort due to the panorama windows in the cabin. But once upstairs the view over Bergen is really amazing. Check the weather forecasts in advance, because the weather is very limited in bad weather. Tip: take a one-way ticket upstairs and walk back through the park towards the city.

Accessibility and campsites in and near Bergen

The center of Bergen can be easily reached by car via the E39 and the E16. Bergen has an airport, a train station and there are good bus and tram connections. But you can also reach Bergen via the water. For example with the ferry from Hirthals (DK) with Fjordline or with the Hurtigruten. Advice: spend the night at 1 of the campsites around Bergen, then take the bus or tram towards the center. A number of nice campsites in and close to Bergen: