Flam: how a small village can be big

The steepest train route in the world, daily arriving cruise ships and an impressive environment, Flam has it all.

Flam has only 500 residents and yet people all over the world know the town of Flam and the Flamsbanen, one of the most spectacular train journeys in the world. In addition, Flam is located in a breathtaking environment at the end of the Aurlandsfjord, a fjord that is connected to the Sognefjord. With many attractions in the immediate vicinity such as the historic center of Laerdal with beautiful wooden buildings, the impressive Naeroyfjord and the "goat village" Undredal. With all this beauty, it is not surprising that Flam attracts around 500.000 visitors a year.

The Flamsbana is the steepest (normal) train route in the world and runs from Flam to the Myrdal station where you can transfer to the train to Oslo or Bergen. To give you an idea: Flam lies directly on the fjord, Myrdal is almost on 900m. height. The route is 20km. long and the slope percentage is around 5.5%. A return trip in the high season costs around NOK 600 ('19). Tip: if you book the train journey early in the morning or in the evening, not only are the prices lower, it is also a lot quieter!

Many cycling enthusiasts will certainly have heard of the Rallervegen, one of the most popular and most beautiful cycling routes through Norway. The cycle route is in total 82km. long, but can also be cycled in sections. For example, you could take the Flamsbanen from Flam to Myrdal, rent bikes there and then return to Flam by bike. (approx. 20km.) If you follow the long version of 82km. you will be rewarded with beautiful views and impressive nature: 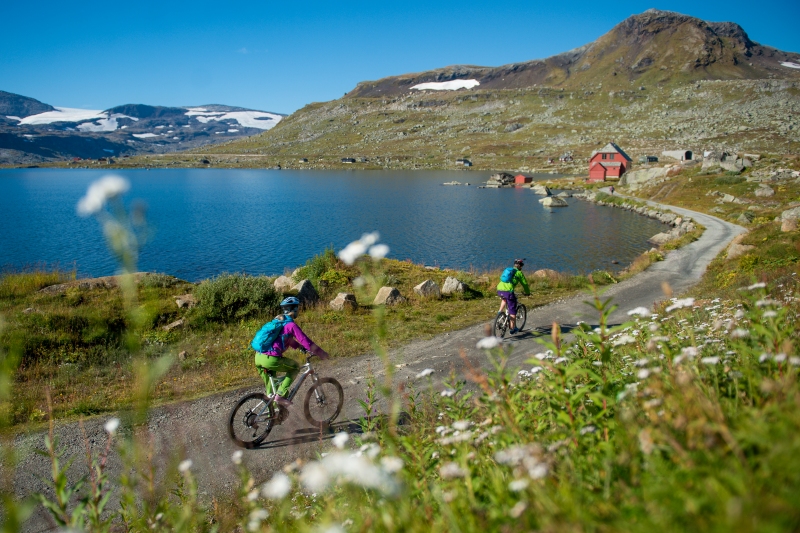 Equally spectacular are the cruise ships that dock in the port of Flam. There is a good chance that you will see one. Because more than 100 cruise ships come in every year. Tourists on the cruise ships do not see much of Flam (except from the train). Often they walk directly towards the Flamsbana ...

Do you want to know when which cruise ship is in the port of Flam: flam-norway-cruise-ship-schedule-2021

Accessibility and campsites in and near Flam

Flam is on the E16 which runs from Oslo to Bergen. A route that is also open in winter. To realize that, there are quite a few tunnels on this route. If you come from Oslo, you will immediately get the biggest pick for you at Laerdal: the 24.5km. long Laerdal tunnel, the longest car tunnel in the world. Then a little one at Flam, after Flam one of 6 km., then the Gudvangen tunnel of 11.5 km. and in the direction of Voss and between Voss and Bergen you will still have a lot of tunnels to get through.

In and close to Flam there are some nice campsites: