Trollstigen: 1 of the 5 most spectacular mountain roads in Europe north of Geiranger

The Trollstigen is part of the “63” road that runs from Valldal (just north of Geiranger) towards Andalsnes. The road has a total length of approximately 48km. The Trollstigen itself has a length of 20km., consists of 11 hairpin bends and is named as one of the 5 most spectacular mountain roads in Europe. Along the way there are several waterfalls that sometimes fall right along the road, impressive mountain peaks and beautiful valleys.

In 1928 the plan was taken to widen the very narrow road from Valldal to Andalsnes and thus make it more accessible to tourists. More than 8 years later - on July 31, 1936 - the new road was opened by King Haakon VII. The name Trollstigen ("the ladder of the Trolls") stems from the old story that the mountains in the area used to be trolls with bushy hair of roots and moss and with big noses and small eyes. On the way to a wedding party they would have been turned into stones after a long delay by the sun. So ….

In principle it is not forbidden to drive over the Trollstigen by car + caravan, but it is not recommended. Due to the average gradient of 9%, the many hairpin bends and - certainly in the high season - the heavy traffic, you may have to reverse a number of times with the caravan. If you can't, leave the caravan at one of the campsites in the area. The Trollstigen is closed to all traffic in the winter months, but the road can also be closed in the spring and autumn due to slippery weather, especially in the early morning or in the evening. 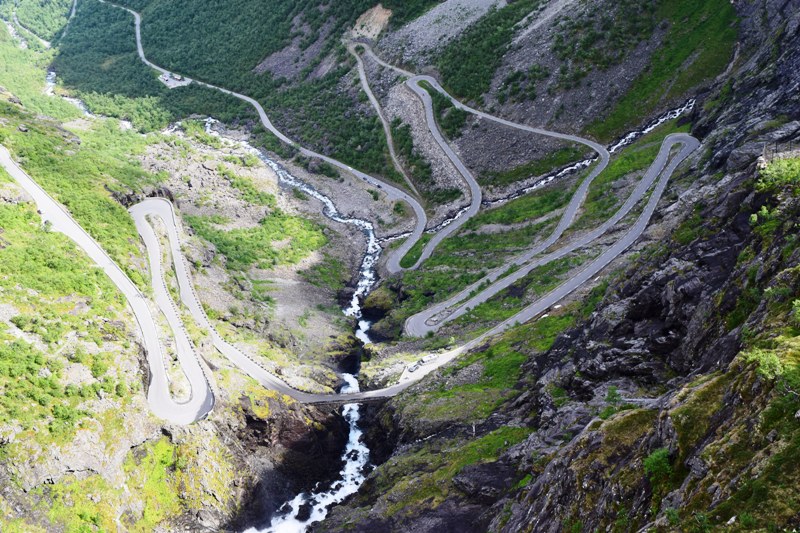 Once at the top you can enjoy the breathtaking view at the Trollstigheim viewing platform. You have a view of the Stigvossen waterfall and impressive mountains such as the Dronningen (= the queen - 1568m.), the Kongen (= the king - 1603m.) and the Bispen (= the bishop - 1475m.). Both "above" at the Trollstigen at the Trollstigen Kafé and "below" (on the side of Andalsnes) at Trollstigen Gjestegard you can make a stop to eat or drink something or of course to buy a nice troll in one of the shops .

Accessibility and campsites near the Trollstigen